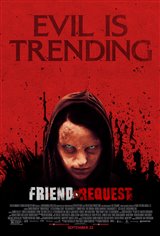 This supernatural thriller follows Laura (Alycia Debnam-Carey), a popular college girl with an active social life, both on and offline. She receives a friend request from a girl named Marina (Liesl Ahlers), and she accepts. The two begin an online friendship thanks to their mutual interest in art. However, Marina soon starts acting possessively and the bizarre images on her profile begin to disturb Laura. After a public falling out, Laura unfriends Marina, which devastates the lonely girl.

In an attempt to get revenge on Laura, Marina kills herself on camera and posts it to social media for all to see. Still shaken up, Laura believes that to be the end of her ordeal. However, she soon begins receiving strange, unexplained messages from Marina and finds herself facing off with a demonic presence that is hell-bent on making her as lonely as her dead former friend.