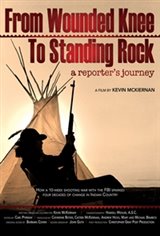 From Wounded Knee to Standing Rock: A Reporter's Journey

In 1973 a rookie reporter is sent to cover armed members of the American Indian Movement (AIM) who have taken over the historic village of Wounded Knee, South Dakota.

En route to Wounded Knee, he is threatened by a paramilitary group whose members oppose the takeover and consider the press the "enemy of the people." To get the inside story, the reporter circumvents government roadblocks surrounding the besieged village and embeds with the militants.

When the Indians finally surrender after 10 weeks, two activists are dead and more than a dozen have been wounded in firefights with federal agents. The FBI arrests those who remain, including the reporter.