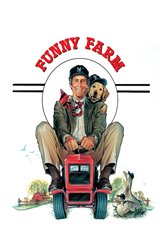 Former sportswriter Andy Farmer (Chevy Chase) and his secretly aspiring author wife, Elizabeth (Madolyn Smith), move to a small farm in Vermont so Andy can focus on writing a novel. They quickly realize that the locals are not as welcoming as they'd like and that the farm is more distracting than inspiring.

Having trouble with his manuscript, and with his marriage on the rocks, Andy is forced to take hilariously drastic measures in an attempt to get his life back on track.