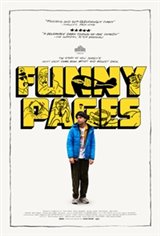 When teenage cartoonist Robert (Daniel Zolghadri) is told he's already drawing at a professional level, he decides to drop out of school and leave his parents' home to start his career.

He finds a basement apartment that he shares with two adult men, and finds a minimum wage job to support himself. A bitingly funny coming-of-age story of a teenage cartoonist who rejects the comforts of his suburban life in a misguided quest for soul.