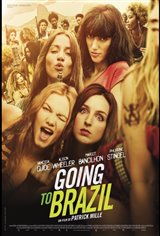 Agathe, a single French professor, lives in Paris with her impulsive teenage sister Lily. They share their apartment with Chloe, whose boyfriend just dumped her. One day, the roommates receive a wedding invitation from their friend Katia, whom they haven’t seen for a year. Although they still resent her for leaving without warning to be with her rich Brazilian boyfriend, Agathe, Lily and Chloé get on a plane for Brazil to go join her.

Soon after arriving in Rio, the three women attend a private party planned by Katia, who isn’t able to make it there herself. A handsome stranger who is clearly intoxicated forces himself on Lily and tries to rape her. During the struggle, the teenager pushes her aggressor, who falls to his death from the balcony. In a panic, the three young women return to their hotel and decide to take the first flight back home to France the next day. But Katia arrives in the early morning and happily shows them a picture of her fiancé. They quickly realize to their shock that he’s Lily's attacker. Their misfortunes are only beginning ...