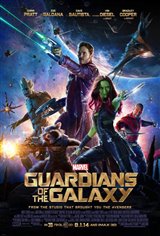 Guardians of the Galaxy

Peter Quill (Chris Pratt) starts off as an Earth child whose mother is dying. When she passes, it changes his outlook on life. He’s then raised as a space adventurer and thief whose life is in danger after stealing a mysterious orb. Many in the universe seek the orb, although only some know its true power and purpose. When Quill discovers why thugs and villains are after the orb, he must bring together rivals and enemies to help protect the universe.

Gamora (Zoe Saldana) is connected with Thanos, a powerful being feared by many. She meets Peter under dangerous circumstances and Peter must quickly decide if the deadly and talented Gamora could become an ally or if her loyalty lies with Thanos. Drax (Dave Bautista) has a rough reputation and has no wish to help Peter, unless they find common ground. Genetic experiment Rocket (Bradley Cooper) has teamed up with the tree-like Groot (Vin Diesel) to capture Peter for bounty, unless he can convince them he’s worth more to them than a payday.