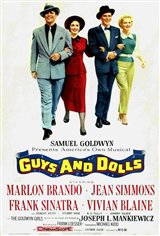 Hollywood legends Marlon Brando, Frank Sinatra, Jean Simmons and Vivian Blain (from the original Broadway cast) are dazzling in this Frank Loesser (How to Succeed in Business Without Really Trying) masterpiece, unleashing a "spectacular, song-and-dance show that's loaded with entertainment" (New York Journal-American). Featuring hits like "Luck Be a Lady" and "A Woman in Love," this smash film version of one of Broadway's most popular musicals is guaranteed, rip-roaring "four-starentertainment" (New York Daily News). The slickest big-time New York City gamblers,Sky Masterson (Brando) and Nathan Detroit (Sinatra), can't resist making or taking a bet on anything. So when a pretty missionary (Simmons) sets up shop in the neighborhood, Nathan stakes a grand that Sky can't seduce her. But all bets are off when Sky falls madly in love in this romantic musical spectacular that sets the Big Apple afire with excitement!