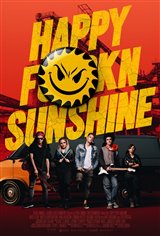 HAPPY FKN SUNSHINE tells the story of Ronnie Weston and her brother Will who live in a one mill town. When the mill workers go on strike, the future for their family looks bleak. Fortunately, Ronnie has found a brisk business selling weed. When Will wants to start a band, Ronnie uses her weed profits to buy Will an electric guitar. Against everyone's advice, Will enlists local outcast Artie Porter as the bass player. Artie spends his days allegedly partying with heavy metal icons and getting fellatio from rock and roll legends - or so he says. Artie’s lies cause instant conflict within the band, especially with Vince, the egotistical lead singer. But the musical chemistry is undeniable, and Will feels that his band just might hit the big time. If they can survive their dying town…and each other.