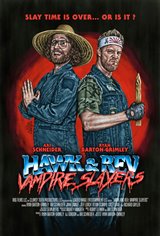 Hawk (Ryan Barton-Grimley) is a night time security guard, when one night he discovers that vampires have moved into his hometown of Santa Muerte, California. Hawk decides to take on the problem himself when the local law enforcement doesn't believe him and refuses to help.

Angry and homeless, Hawk is incapable of taking on the vampires on his own. With no one believing him, he turns to the only person who does, his friend Rev (Ari Schneider), who agrees to help as long as they don't hurt or kill anybody. Determined to make their home safe again, Hawk and Rev go all in by training together, investigating the vampires, and preparing anti-vampire weapons for their upcoming battle.