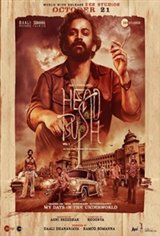 Head Bush revolves around the happenings in Jayaraj's Life. The Rise of the Jayaraj.

The journey from a small time "pailwan" to Karnataka's first underworld Don is presented here.