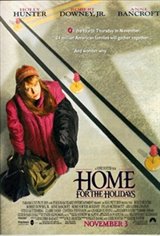 Home for the Holidays

It's been said that while most people love their families, they don't always like them very much, and that emotional dividing line is the heart of this comedy directed by Jodie Foster.

Claudia Larson (Holly Hunter) usually approaches family reunions with a certain trepidation, but as she prepares to fly from her home in Chicago to her parent's place in Baltimore for Thanksgiving, she is more apprehensive than usual.

Claudia has just lost her job, she's not feeling at all well, and her teenage daughter, Kitt (Claire Danes), who is staying behind, informs Claudia on the way to the airport that she plans to use the weekend to lose her virginity with her boyfriend.

The family festivities are already under way when Claudia arrives at the home of her mother, Adele (Anne Bancroft), and father, Henry (Charles Durning). Claudia's brother, Tommy (Robert Downey Jr.), whose homosexuality is tolerated without being discussed on a practical basis, has brought along his new friend Leo Fish (Dylan McDermott).

Tommy doesn't get along well with his fussbudget sister, Joanne (Cynthia Stevenson), who wears her self-sacrifice like a badge of honor, and he simply hates her husband, Walter (Steve Guttenberg), who has often been the target of Tommy's barbed sense of humor.

While the siblings and in-laws struggle to remain civil, their quite eccentric aunt Gladys (Geraldine Chaplin) arrives; she insists on discussing her digestive problems, and after a few drinks, she confesses her long-ago lust for Henry. Home for the Holidays was Jodie Foster's second film as a director, and the first in which she didn't also star.