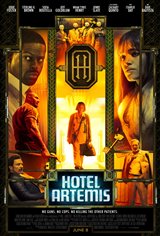 Hotel Artemis takes place in the year 2028, in the midst of violent riots in Los Angeles. We follow a cast of eclectic characters who find refuge in a members-only hospital for criminals. This secretive hospital, known as Hotel Artemis, is run by Jean Thomas (Jodie Foster) who is known as "The Nurse."

Waikiki (Sterling K. Brown) and his younger brother Honolulu (Brian Tyree Henry) arrive at the Hotel Artemis with gunshot wounds after a bank robbery gone awry. Honolulu is bedridden, while Waikiki talks with the other guests. He meets a sensual assassin known as Nice (Sofia Boutella) and a hothead known as Acapulco (Charlie Day). The Nurse and her assistant, as well as security guard Everest (Dave Bautista), are in for a busy night, as more and more patients arrive, whose ambitions are intricately and dangerously intertwined.

Nice learns that the brothers have stolen a valuable item in the bank robbery, which belongs to a prominent gangster and owner of the hotel, named The Wolf King (Jeff Goldblum). At the same time we see the Nurse treating other patients and reliving the trauma of her departed son.

Mayhem is unleashed when, after a violent riot on the streets of Los Angeles, The Wolf King arrives at the Hotel Artemis in need of treatment.