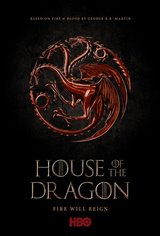 House of the Dragon

Set 200 years before the events seen in the TV series Game of Thrones, House of Dragon follows the reigning dynasty known as House Targaryen. A story about gods, kings, fire, and blood, we witness the rise and fall of House Targaryen.

An all-powerful dynasty that once dominated the Seven Kingdoms of Westeros with the power of dragons, their actions lead to a bloody Targaryen civil war, known as the Dance of Dragons, that forces families and their dragons to kill one another.