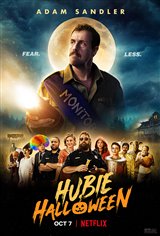 Salem resident Hubie Dubois (Adam Sandler) is Halloween's biggest fan, but his efforts go largely unappreciated. He's a little bit on the odd side, and over the years, he has become the town's biggest joke. His constant complaints to the police have made him unwelcome there and he's become like "the boy who cried wolf."

When Hubie discovers a man tied up and gagged in a cornfield, as soon as he calls the police to report the crime, they hang up on him as soon as he starts talking. As the events of Halloween get more chaotic and dangerous, Hubie believes he's the only one who can save the town.