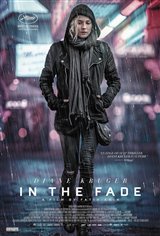 Katja Sekerci (Diane Kruger) lives in Hamburg, Germany with her Kurdish husband Nuri (Numan Acar), a former drug dealer who she married while he was in prison. Years later, he has turned his life around and holds down an office job. Nuri and Katja, still very much in love, also have a six-year-old son, Rocco. One day Katja drops Rocco off with Nuri at the office and heads to a spa with a friend. When she returns several hours later, she finds a bomb has turned the building, which is surrounded by police tape, to rubble. Katje is devastated when she learns her husband and son were killed in the blast.

Katja remembers seeing a blonde woman outside the building, who left her bicycle against a post without locking it. It's discovered that the bomb came from a package in the bike's basket. Having lost her husband and son, Katja is close to suicide until she learns that police have tracked down and arrested the woman, Edda Möller (Hanna Hilsdorf) and her husband André (Ulrich Friedrich Brandhoff), who are neo-Nazis. With new hope for justice and the help of Danilo (Denis Moschitto), a lawyer and Nuri's best friend, Katja gets involved in the trial against the two suspects.