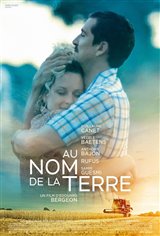 In the Name of the Land

1979. Pierre returns to France after a stay on an industrial farm in the United States after his father gives him the small family farm to run. Pierre begins his adult life alongside his partner Claire. 1996. Now the father of two children, Pierre struggles to feed his family, pay his debts, resist pressure from the big food companies and face his father's criticisms of his work ethic. In this increasingly difficult situation, Pierre gives in to discouragement and depression.