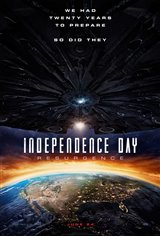 Using recovered alien technology after the last invasion in 1996, the nations of Earth have collaborated on a defense program called Earth Space Defense (ESD), which serves as the Earth's early warning system using technology salvaged from the remains of the alien forces.

But nothing can prepare them for the aliens' next attack — and only the ingenuity of ESD director David Levinson (Jeff Goldblum), Jake and a few other brave men and women can bring our world back from the brink of extinction.