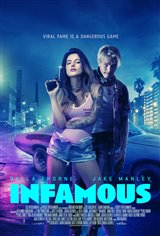 Arielle Summers (Bella Thorne) is a down-on-her-luck dreamer who longs for popularity. Dean Taylor (Jake Manley) is an ex-con working for his abusive father. The two have an instant connection, and after the accidental death of Dean's father, are forced on the run.

In order to sustain their trip, the two are relegated to robbing gas stations and small shops. In an attempt to gain social media clout, Arielle livestreams their robberies. The two become a modern day viral Bonnie & Clyde steam-rolling towards a tragic ending.