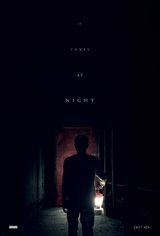 It Comes at Night

As an unnatural threat kills many people around the world, Paul (Joel Edgerton), along with his wife and son have sealed themselves away in their home. When a desperate young family seeking refuge arrives, they're put to the ultimate test.

Although they open their home to the strangers, paranoia and mistrust begin to get the best of them. As the horrors outside get closer, it awakens something hidden and monstrous within Paul as he learns that the protection of his family comes at the cost of his soul.