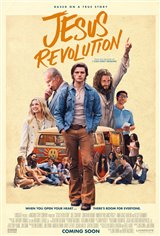 In the 1970s, Greg Laurie and a sea of young people descend on sunny Southern California to redefine truth through all means of liberation. Inadvertently, Laurie meets a charismatic street preacher and a pastor who open the doors to a church to a stream of wandering youth. What unfolds is a counterculture movement that becomes the greatest spiritual awakening in American history.