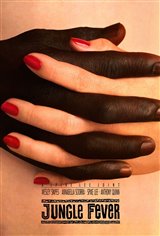 Spike Lee defines jungle fever as sexual attraction between members of two races. In his film Jungle Fever, he examines the repercussions of an interracial affair upon two very distinct communities. Wesley Snipes is Flipper, a happily married and successful architect, and Annabella Sciorra is Angie, an office temp. When she starts working in Flipper's Manhattan office, one day they look at each other and are soon having sex over a blueprint-strewn desk. Their liaison causes an explosion on both homefronts. Flipper's family consists of his father Doctor Purify (Ossie Davis), a former preacher; his mother Lucinda (Ruby Dee); his violent, crackhead brother Gator (Samuel L. Jackson); and his wife Drew (Lonette McKee), whom he loves, despite his sexual attraction to Angie. Angie's family is a typical Italian-American household from Bensonhurst. She's engaged to Paulie Carbonne (John Turturro), who works in a deli owned by his father Lou (Anthony Quinn). When the two families find out about Flipper and Angie's affair, their shock leads to recriminations and racial animosity.