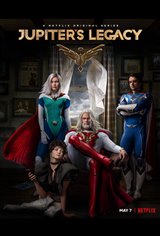 In the 1930s, a group of individuals arrived on an island where they were bestowed with superpowers, becoming the first generation of superheros. The old guard are respected and revered for their great deeds, as they have protected the world for nearly a century. However, each of them now face a new problem, keeping their families together and guiding their super-powered children down the right path.

Self-absorbed and obsessed with fame, the younger generation struggles, living in their parents' shadows as they feel pressure to be the "ideal," which brings forth conflict between the two generations of superheroes. Training to one day replace their parents, tensions begin to rise as the young heroes grow hungry to prove their worth to their parents, who don't believe that they are ready to protect the world.

Based on the graphic novels by Mark Millar and Frank Quitely.