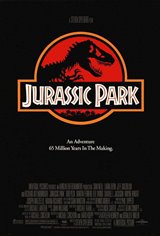 On a remote island where an amazing theme park with living cloned dinosaurs is located, the security system breaks down and dinosaurs are on the loose.

When an employee at Jurassic Park dies, the park and its owner, John Hammond (Richard Attenborough), are in for a whirlwind of events. The park is under strict investigation before its official opening and Hammond must prove its safety to experts, including Dr. Alan Grant (Sam Neill) and Dr. Ellie Sattler (Laura Dern). The experts, along with Hammond's two grandchildren, begin their adventure through the park, but quickly realize the park has a few flaws, not to mention there's a tropical storm on the way. There is also a Tyrannosaurus Rex is on the loose, as well as three Velociraptors, causing extreme chaos and leaving trails of injuries.