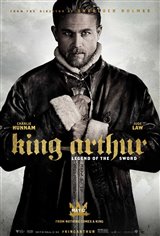 King Arthur: Legend of the Sword

When young Arthur's uncle Vortigern (Jude Law) decides he wants the crown for himself, he murders his brother and sister-in-law, leaving Arthur an orphan. The boy escapes and finds a home at a brothel, where he joins a gang and runs the back alleys of the city, learning self defense in order to survive.

He's challenged one day to get the sword Excalibur out of the stone — many have tried before him and failed. When he succeeds, Arthur (Charlie Hunnam) is instantly challenged by the power of Excalibur and forced to make some hard choices. Throwing in with the Resistance and a young woman known as The Mage, he must learn to master the sword, face his demons and unite the people to defeat his uncle, finally taking his rightful place as King in order to restore peace to the kingdom.