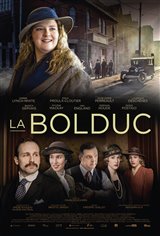 After having worked as a maid and in a textile mill in her teens, at 20, Mary Travers marries Édouard Bolduc, a "good Catholic." They settle in a popular Montreal neighborhood. However, she faces a number of difficult pregnancies. Her first child is stillborn, and of the three children who follow, two die young.

When an economic crisis hits Quebec, Mary considers getting a job but doesn’t want to upset her husband. When he’s suddenly fired, Mary decides to listen to her good friend Juliette, who drags her to audition for an opening for a violinist at the National Theater. Mary, a self-taught musician, gets the job.

When an influential impresario hears her, what began as just a way to earn a few dollars to contribute to the family income, becomes a lucrative business. She’s signed to a recording contract and goes on to become a huge success.

Barely out of her kitchen, Mary becomes a household name in Quebec, touring with her compositions, an irresistible mixture of Irish and French-Canadian folklore, in towns and villages throughout Quebec.