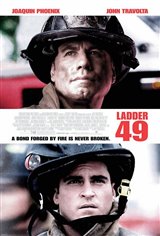 As he struggles to cope with a risky, demanding job that often shortchanges his wife and kids, he relies on the support of his mentor and chief, Mike Kennedy (John Travolta) and his second family -- the brotherly bond between the men of the firehouse.

But when Jack becomes trapped in the worst blaze of his career, his life and the things he holds important -- family, dignity, courage -- come into focus. As his fellow firemen of Ladder 49 do all they can to rescue him, Jack's life hangs in the balance.