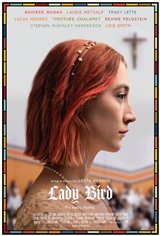 High school senior Christine McPherson (Saoirse Ronan) — also known by the nickname she chose for herself, Lady Bird — is desperate to get out of California. She can't wait to move to the East Coast, where she dreams of big city life and Ivy League universities.

However, because her grades are nothing spectacular and she has no connections, Lady Bird decides she needs to add extracurriculars to make her college applications stand out.

She considers joining Math Olympiad, but her math grades are terrible, so she joins the drama club. Meanwhile, her mother, who doesn't understand Lady Bird's aspirations and desire to move far away, has her hands full supporting the family by working double shifts as a nurse. She struggles to understand her self-centered daughter, who believes she deserves everything in life and that everyone should love her the way she is.