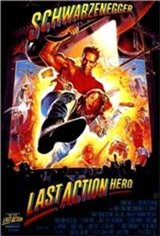 Arnold Schwarzenegger appears as a pumped-up Shakespearian hero while an announcer bellows, Something is rotten in Denmark -- and Hamlet is taking out the trash! This gag sets the stage for the post-modernist action epic The Last Action Hero. The film concerns Danny Madigan (Austin O'Brien), a lonely eleven-year-old boy who escapes from his bleak New York City reality by glorying in the action adventure movies of his favorite film character, Jack Slater (Arnold Schwarzenegger). Danny's friend is an elderly movie projectionist, Nick (Robert Prosky), who lets Danny into the shabby Times Square movie theater where he works so Danny can see Slater's new movie. He hands Danny a magic ticket given to him years ago by Houdini, and when Nick rips the ticket and gives Danny the stub, Danny finds himself catapulted from the theater into the back seat of Slater's speeding sports car in Jack Slater IV. Danny becomes Slater's helper as Jack battles a trio of nefarious bad guys --Benedict (Charles Dance), Vivaldi (Anthony Quinn) and The Ripper (Tom Noonan). But things get out of hand when Benedict steals Danny's magic ticket stub and transports himself into Danny's reality. Benedict and The Ripper proceed to wreak havoc along Broadway, forcing Slater to cross into reality to get the villains and, in the process, learn about blood and pain.