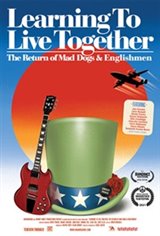 Learning to Live Together: The Return of Mad Dogs & Englishmen

In the spring of 1970, Joe Cocker undertook what became the legendary 20th-century musical experiment?a traveling rock & roll commune that crisscrossed the country on a private jet. This meteoric tour came and went over a magical two months and as a one-time-only experience, it developed a mythical status amongst music fans throughout the world.

Many attempts have been made to reunite the Mad Dogs, but it was never recreated in any way, shape or form - until now.In "Learning to LiveTogether," first-time filmmaker Jesse Lauter tells the complete story through the lens of the Grammy Award-winning Tedeschi Trucks Band's reunion of the Mad Dogs.