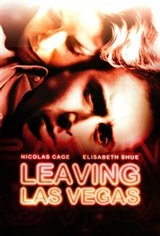 Mike Figgis' grim drama documents a romantic triangle of sorts involving prostitute Sera (Elisabeth Shue), failed Hollywood screenwriter Ben (Oscar-winner Nicolas Cage), and the constant flow of booze which he loves more dearly than life itself. Arriving in Las Vegas with the intention of drinking himself to death, Ben meets Sera, and they gradually begin falling for one another. From the outset, however, Ben warns Sera that no matter what, she can never ask him to quit drinking, a condition to which she grudgingly agrees. A darkly comic tragedy, Leaving Las Vegas charts the brief romantic convergence of two desperately needy people who together find a brief flicker of happiness.