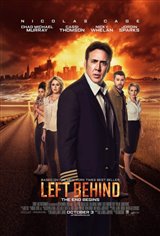 Without any warning, millions of people around the world suddenly vanish without a trace, leaving behind their clothing and belongings. Their unmanned cars crash and burst into flames. The people who remain go on looting sprees and cause riots.

A pilot (Nicolas Cage) who was in the air when the vanishing occurred struggles to save the lives of his small group of passengers.

Based on the New York Times best-selling novel.