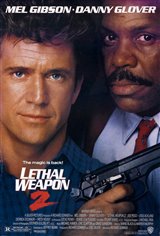 After perils too numerous to mention, Riggs and Murtaugh shoot it out with the heavies on the deck of a South African cargo ship. Lethal Weapon 2 contains as one of its comic high-points a now famous suspense scene: Mel Gibson agonizingly attempting to extricate a terrified Danny Glover from a booby-trapped toilet seat.