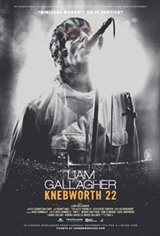 Liam Gallagher: Knebworth 22 is a new feature-length documentary that traces Liam back to the site of his former band's defining performances, including all-new interviews, behind the scenes and concert footage captured from 20 camera positions. The film also goes a little bit further, seeking out stories and perspectives from collaborators and fans of different generations from around the world, transposing the emotional and social context of the 90s' shows versus the tumult of our current era.