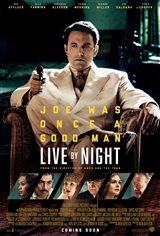 When Joe crosses a powerful mob boss by stealing his money and his moll, he pays for it. The affair ends in tragedy and he sets out on a path of revenge and ambition that leads him out of Boston and up the ladder of Tampa's rum-running underworld. As he navigates Prohibition-era Tampa, his moral code is tested and he learns that his desire to see justice served comes with a hefty price tag.

Based on a Dennis Lehane novel of the same name.