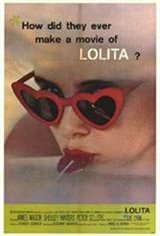 How did they make a movie out of Lolita? teased the print ads of this Stanley Kubrick production. The answer: by adding three years to the title character's age. The original Vladimir Nabokov novel caused no end of scandal by detailing the romance between a middle-aged intellectual and a 12-year-old nymphet.

The affair is cleansed ever so slightly in the film by making Lolita a 15-year-old (portrayed by 16-year-old Sue Lyon). In adapting his novel to film, Nabokov downplayed the wicked satire and sensuality of the material, concentrating instead on the story's farcical aspects.

James Mason plays professor Humbert Humbert, who while waiting to begin a teaching post in the United States rents a room from blowzy Shelley Winters. Winters immediately falls for the worldly Humbert, but he only has eyes for his landlady's nubile daughter Lolita.

The professor goes so far as to marry Winters so that he can remain near to the object of his ardor. Turning up like a bad penny at every opportunity is smarmy TV writer Quilty (Peter Sellers), who seems inordinately interested in Humbert's behavior.

When Winters happens to read Humbert's diary, she is so revolted by his lustful thoughts that she runs blindly into the street, where she is struck and killed by a car. Without telling Lolita that her mother is dead, Humbert packs her into the car and goes on a cross-country trip, dogged every inch of the way by a mysterious pursuer.

Once she gets over the shock of her mother's death, Lolita is agreeable to inaugurating an affair with her stepfather (this is handled very, very discreetly, despite the slavering critical assessments of 1962). But when the girl begins discovering boys her own age, she drifts away from Humbert. One day, she leaves without warning.

This is humiliation enough for Humbert; but when he discovers who her secret lover really is, the results are fatal. We are prepared for the ending because the film has been framed as a flashback; what we are not prepared for is Stanley Kubrick's adroit manipulation of our sympathies and expectations.

An incredibly long film considering its subject matter, Lolita is never dull, nor does it ever stoop to the sensationalism prevalent in the film's ad campaign.