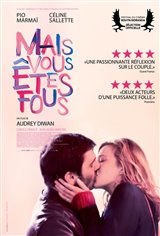 Romain and Camille live an idyllic existence with their two daughters when one of the girls begins to have convulsions. In the hospital, tests reveal the presence of cocaine in her blood. When he sees the disbelief on Camille's face, Romain realizes he has to come clean with her. He has been taking drugs for several years now. His daily consumption allows him to keep up the pace of his stressful dentist practice. But how can he explain his child’s overdose? Further examinations reveal that Camille and their other daughter also have traces of cocaine in their blood. Social services immediately takes the children away from them and places them with the maternal grandparents. A skillful strategist, the couple’s lawyer suggests they separate, to enable Camille to regain custody of the girls. However, she and Romain are still in love and so for them, the nightmare is just beginning.