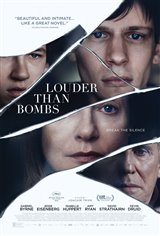 Gene Reed (Gabriel Byrne), an aging high-school teacher, is grappling with the sudden death of his photojournalist wife Isabelle (Isabelle Huppert). To make matters worse, he is having a difficult time connecting with his loner son Conrad (Devin Druid).

Jonah (Jesse Eisenberg), Gene's eldest son, a budding academic, is entirely different from his brother. He comes home shortly after the birth of his first child. Gene sees his return as an opportunity to bridge the gap with Conrad. His attempt at family reconciliation, however, will have to survive an upcoming, posthumous exhibition of Isabelle's work, which may reveal some of the family's darker secrets.