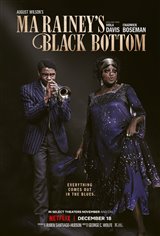 In Chicago in the 1920s, Ma Rainey (Viola Davis) has made a name for herself playing in night clubs, and has become known as "Mother of Blues." She loves what she does, even if she feels that the white management who want her to make a record don't care about her as a person, only about her voice.

She loves her band of musicians, including loyal veterans Cutler (Colman Domingo) and Toledo (Glynn Turman). However, her ambitious horn player Levee (Chadwick Boseman) has big plans for the band that don't meet Ma's approval. He dreams of having his own band and making his own records, but tensions with the other band members may jeopardize his bright future.

Based on the play by Pulitzer Prize winner August Wilson.