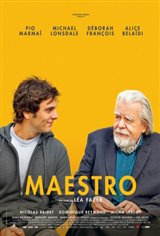 Henri is a young actor who dreams of landing roles in Hollywood films, but he hasn’t had much luck other than the occasional commercial. His agent sends him to audition for a new low budget film by renowned art house director Cédric Rovere. To his surprise, Henri gets the part.

When he arrives in the small town where filming will take place, Henri discovers that Rovere works with a small crew and shoots on Super-16mm film. Although Henri is happy to be involved, mainly because it gives him a chance to get close to one of his co-stars, the beautiful Gloria, he’s incapable of taking the movie seriously.

When Rovere takes a special interest in Henri and helps him develop a deeper understanding of his role, the young man begins to understand the work that needs to be put in on the road to becoming a good actor.