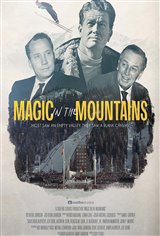 Magic in the Mountains

Magic in the Mountains tells the remarkable underdog story of how Squaw Valley, a little-known ski area in California, won the bid for the 1960 Winter Olympics and, with the help of Walt Disney, changed forever the ways in which the Games were presented.

The documentary features never-before-seen archival footage from the 1960 Olympic Games and revealing interviews with participating athletes and attendees. The 1960 edition of the Olympics introduced a substantial array of "firsts," including such innovations as live broadcast, instant replay, sponsorships, and an official Olympic Village for the athletes.

Perhaps most importantly, thanks to Disney's involvement in producing the Games, Squaw Valley featured an unprecedented - but soon to be standard - level of pageantry for the opening and closing ceremonies.