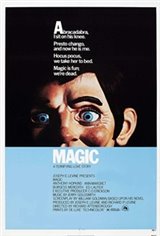 Anthony Hopkins is a ventriloquist psychologically tormented by his dummy in the Richard Attenborough thriller Magic (a film with a story that may seem familiar to those who have seen the Michael Redgrave segment of Dead of Night, or the Cliff Robertson episode The Dummy from The Twilight Zone television series).

William Goldman based his screenplay on his best-selling novel. Hopkins plays Corky, a seedy magician who is hooted off the stage in the low-rent clubs that will stoop to hire him. But when he comes across a dummy named Fats, his career is energized. Corky sees in Fats everything he lacks himself -- confidence, creativity, and verbal agility.

With the help of his agent Ben Greene (Burgess Meredith), Corky rises to the top of the nightclub circuit. But with Corky's success comes an increased paranoia, and he turns down a TV contract, believing that it would mean taking a medical examination and that rumors of his mental instability might leak out.

While a frustrated Ben high tails it to the Catskills to find Corky, Corky discovers that he still has feelings for Peggy, but lands in the middle of a love triangle between the woman and her husband, where his schizophrenic personality manifests itself and additional murders occur.