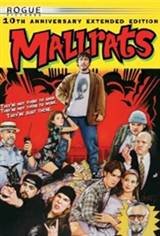 Kevin Smith's follow-up to his unexpected hit Clerks details the pointless story of T.S. (Jeremy London) and Brodie (Jason Lee), two suburban New Jersey slackers who decide to head to the mall in search of solace after being dumped by their girlfriends (Shannon Doherty and Claire Forlani, respectively).

There the two young men machinate to appear on a game show being staged and also manage to meet comic-book magnate Stan Lee. However, complications arise when the girls show up.