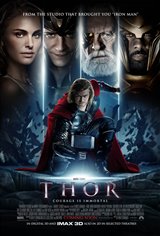 In celebration of the 10th Anniversary of the Marvel Cinematic Universe, Marvel Studios is hosting a film festival including all twenty Marvel films. This festival will be presented exclusively in IMAX®, including three films that have never before been seen on IMAX® screens. Fans will have the opportunity to see the full slate over the course of five days, followed by two themed days of “Origins” and “Team Ups”.

As the son of Odin, king of the Norse gods, Thor will soon inherit the throne of Asgard from his aging father. However, on the day that he is to be crowned, Thor reacts with brutality when the gods' enemies, the Frost Giants, enter the palace in violation of their treaty. As punishment, Odin banishes Thor to Earth. While Loki, Thor's brother, plots mischief in Asgard, Thor, now stripped of his powers, faces his greatest threat.