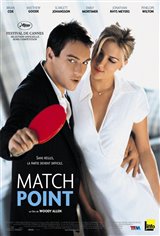 A one-time tennis pro, Chris Wilton (Jonathan Rhys Meyers) was used to falling just short in his life. But when he befriends Tom Hewett (Matthew Goode) and marries his sister, Chloe (Emily Mortimer), the doors are opened to the kind of money and success that Chris had once only dreamed of having.

Chris should have settled for happiness, but he is torn by his attraction to Tom's impossibly beautiful and alluring fiancée, Nola (Scarlett Johansson). The attraction turns to an obsession that forces Chris to make a critical choice. Now everything in his life hinges on whether or not Chris falls short again...and if his luck runs out.