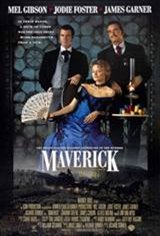 Bret Maverick (Mel Gibson) is a gunslinging con man who develops a tricky scheme to make a killing at a major poker tournament. In need of a large stake to enter the major card competition that will take place on a Louisiana steamboat, Maverick decides to take advantage of a few small-town poker players.

These include the seemingly sweet Annabelle Bransford (Jodie Foster) and the intimidating Angel (Alfred Molina), neither of whom is too happy about their loss. Things become even more complicated for Maverick when the law gets involved, with Marshal Zane Cooper (James Garner) giving chase. A series of stagecoach chases, complicated cons, and gun battles ensue, with Annabelle and Maverick finding time for plenty of flirtation along the way.

Inspired by the popular television show (1957 to 1962) of the same name, starring James Garner as Bret Maverick.