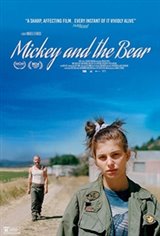 Mickey and the Bear

From the first interaction between Mickey and her ex-Marine father Hank, it's obvious that their relationship, while loving in its way, isn't especially safe for the teenage girl.

Hank has spent years in their small Montana town getting drunk, getting high, and getting in trouble with the cops, whom he charms with raucous tales of his exploits while leaving Mickey to pick up the pieces.

She's the one who pays the rent on their double-wide trailer and buys beer with the money she gets from her after-school job at a taxidermy shop; in return, she's subject to Hank's volatile, controlling behavior and cruel sense of humor.

When not mothering her father, she's stuck managing Aron, her excruciatingly selfish boyfriend, who has a one-track mind for pressuring her to get married and start having kids before she even graduates from high school.

But Mickey is smart and stubborn, and she fully intends to escape the bleak future laid out for her -- until a devastating betrayal by Hank eliminates her best chance for independence.