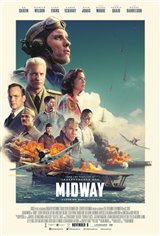 Following the attack on Pearl Harbor in 1941 during WWII, military intelligence officer Edwin Layton (Patrick Wilson) calls the attack the single greatest intelligence failure in American history. Unwilling to let a second mistake happen, Layton works to anticipate Japan's next major offensive, which he predicts will be Midway.

His superiors inform him that Washington disagrees, but Layton's prediction is proven right. The U.S. Navy prepares for their biggest battle in the Pacific yet—the Battle of Midway—as they look to prove themselves in the wake of their defeat at Pearl Harbor.