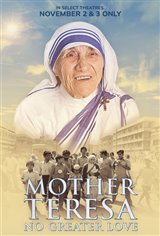 Twenty five years have passed since the death of Mother Teresa of Calcutta, sparking a renewed interest in this spiritual giant of the 20th century.

This is far more than a documentary. It is at once a soaring tribute to a spiritual icon, a powerful witness of authentic Christian charity, and a guidepost for all who seek hope in our turbulent times.