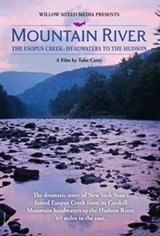 Mountain River -The Esopus Creek: Headwaters to the Hudson

The story begins with the ancient geologic forces that formed the Catskills and goes on to explore the Native American and colonial settlements along the Esopus.

The documentary covers the history of New York City's Ashokan Reservoir, the development of water-power on the stream, and the innovative beginnings of the American Industrial Revolution along the Esopus in Saugerties.

The film celebrates the Upper Esopus as a world class trout fishery, a recreational resource and a critical source of clean, unfiltered water for millions of New Yorkers. Below the Ashokan Reservoir, the Lower Esopus flows through steep gorges, rich agricultural lands and several towns on its way to the Hudson River.