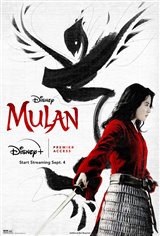 When Northern invaders led by Bori Khan (Jason Scott Lee) threaten to take over the country, the Emperor issues an order that each family must send one man to serve in the Imperial Army to defend the country.

Since her father is the only male in her family, he volunteers despite his leg injury. That’s when Mulan decides that she will protect him and sneaks out at night, disguising herself as his son, Hua Jin, and goes to the army camp.